The effect of Lang’s in stimulating the thirst reflex can be used to encourage a horse to drink before and after travelling and will also encourage those horses that may be reluctant to drink when subject to prolonged exercise.

Administer entire contents of 500 mL by intravenous infusion. This product should be used only by a registered veterinary surgeon

“When performance on a racetrack is well below their best but horses still appear in good health and skin elasticity is normal, several months in work may be enough to bring on adrenal exhaustion. A side effect of this is reduced adrenal output, which may cause a loss of salts in the urine in excess of fluids.

The depletion of body salts reduces cellular efficiency and produces sub-optimal athletic performance. At morning trackwork horses’ overall times may be excellent, but fractional times may reveal they are not going to the post strongly.

If training is carried out “on the bit” and horses are seldom pushed right out, the tendency to wilt under pressure often does not show up until they race. Such horses appear to be going three-quarter pace behind the leaders until they turn into the straight, but when pressure is on they fade. It may be observed that such horses are not even blowing when they have completed the distance.

A further group of horses that fall into this category are the “hard pullers” which make it difficult to regulate the quality of work.

Administration of a Lang’s Solution temporarily changes the blood picture of a hypotonic contraction to one of a hypertonic expansion – a gain of salts in excess of water.

The increased extracellular sodium from the Lang’s results in a transfer of fluid from the intracellular to the extracellular compartments. The packed cell volume (PCV) is reduced due to the increased plasma volume by the temporary transfer of tissue fluids into the bloodstream. The red blood cell (RBC) count and haemoglobin level is also reduced, sometimes to an apparently anaemic level.

The effect of a Lang’s is similar to the once common practice of “Bleeding” – a procedure that dramatically depleted blood volume and as a result, stimulated the recovery of body fluids to normal levels.” 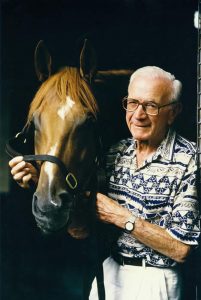