Previous Next
Signs of foaling

Often the first sign that you will be able to notice is a distended udder. During the last month of gestation, the udder usually enlarges. The mare’s udder may fill up at night while she is resting and shrink during the day while she moves around. You may also notice as the udder enlarges, the upper portion of the teat is stretched in a manner that makes it difficult to distinguish it from the rest of the udder. The lower portion of the teat remains small but as foaling gets nearer the teat enlarges and is turned outward by the increasing pressure from within the udder. When the udder remains full throughout the day and the teats appear full, foaling is usually imminent. 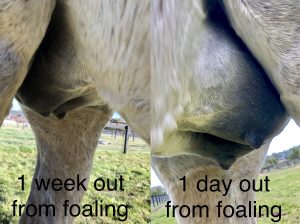 Usually from about 2-3 weeks out from foaling you may notice the relaxation of the pelvic muscle region. This process is gradual and may not be seen on all mares, but, in most, a distinctive change in the appearance can be seen. A hollow develops on either side of the root of the tail as muscles of the hip and buttock area start to relax. The abdomen also becomes increasingly pendulous as it enlarges. About a week before foaling it may appear to shrink as the foal shifts into position in preparation. 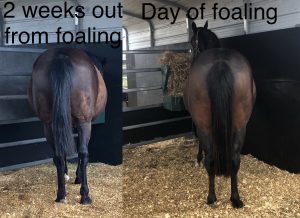 This is when wax-like beads (droplets of colostrum) appear at the end of each teat. This sign usually appears anywhere between 12-36 hours before foaling with most mares. Some other mares may wax up a week or two before foaling and others may not wax up at all. 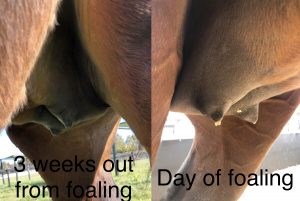 Usually, it’s within the last 24-48 hours before foaling, that you may notice the mare’s vulva can be observed to swell and relax. This prepares the vulva for stretching several times its normal size to allow passage of the foal. 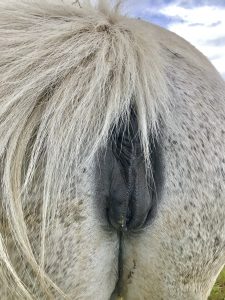 Waxing up can also sometimes be accompanied by droplets of milk or the running of milk. Although wax and milk secretion usually indicate delivery will occur very soon, many mares foal without either, while some mares drip or stream milk for several days before foaling. Unfortunately, mares who stream milk before foaling lose large amounts of colostrum, the vital first milk that contains antibodies for the newborn foal. If a mare appears to be running excessive amounts of milk, you can always collect it to feed to the foal once born. Additionally, an IGG test is recommended to ensure that the foal has received enough colostrum. 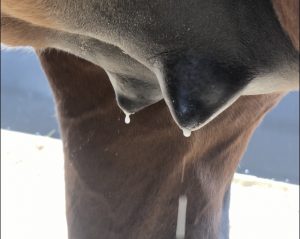 Many mares exhibit behaviour changes in the time leading up to foaling down. Mares may become cranky, restless, and as they enter the first stage of labour, they usually want to be left alone. A mare may walk continuously, swish her tail, look at her sides, or kick at her abdomen. These signs are also indicative of colic, but if the mare is eating, drinking, and passing manure frequently, then these are usually signs of the first stage on labour.

As labour approaches it is not uncommon for a mare to break into a sweat. The mare’s neck, flanks may feel warm and damp or a general sweat over all the body may occur. Once again, this sign is considered within the realm of normal for the first stage.

Whilst the time leading up to the arrival of a new foal is often filled with anticipation and excitement, it is important to remember that at times things may not run to plan. It is always a good idea not to rely solely on your mare to display signs of foaling visually. There are foaling alarm devices and camera systems available to be used for foaling down and these are great to use in conjunction to visual monitoring, especially considering mares often foal down throughout the night. If you are inexperienced at foaling down, some equine vet clinics and studs offer foaling down services where your mare can be foaled down for you. It is also very important if you do decide to foal down yourself, make sure you always have a vet or an experienced person on call to help you out or assist in need be.