Cribbing or Wind Sucking in Horses

Previous Next
Cribbing or Wind Sucking in Horses

Cribbing or Wind Sucking in Horses

Cribbing or crib biting is a vice in which the horse places its upper incisors on a horizontal solid surface, presses down, arches its neck and pulls back.  As this occurs the horse usually makes a grunting noise and gulps air.  Wind sucking may occur without the horse grasping anything with its teeth, most horses have their own manner of wind sucking. Some horses engage in these vices only when alone; some won’t do them if they know they are being watched.

Cribbing is a fairly common behavioural problem, constituting 27% of referrals to one equine behaviour clinic.  It’s reported that nervous hyperactive horses kept in a stall most of the time and exercised and groomed little are most likely to crib and wind suck, whereas these vices are rarely practiced by placid draft horses or ponies.

It has also been found that the incidence is as high as 30% in some families of Thoroughbreds as compared to 2.5% in all Thoroughbreds in the study.  Imitation of mares by their foals was excluded as the reason for the higher incidence.  Thus, inheritance of the vice, or the temperament leading to its occurrence, appears to be an increased risk factor in some cases.

The cause for crib biting is unknown.  It is thought to usually start in confined horses due to frustration, boredom, and/or imitation, but once established, persists even when the horse is on pasture.  These vices have also been observed to increase when a highly palatable high-grain diet is fed, perhaps because this may stimulate endorphin release, which in turn stimulates dopamine release.

Cribbing, when continued over a long period, may cause wear and erosion of the upper incisors and pronounced hypertrophy of the neck muscles.  In severe longstanding cases, tooth wear may progress to such an extent that the incisors no longer meet when the mouth is shut and, therefore, the horse can no longer graze.  A few horses may spend so much time cribbing that feed consumption and as a result body condition and weight are decreased.

However, most horses have no problems as a result of either cribbing or wind sucking; mostly it just annoys those around the horse.  Because of this, some have recommended that if the horse is in good condition, ignoring it may be best.  However, most horse owners prefer to try and prevent it, and other horses may mimic cribbers and wind suckers.  Because of this, cribbers and wind suckers should be kept separate from other horses, but they should be provided with companionship, such as another animal.  Solitary confinement will likely worsen the problem or cause others.

Numerous methods have been tried to prevent cribbing and wind sucking, none are universally successful, but some methods may work in some cases.  The most common method is fastening a several-inch-wide (5 to 7cm) leather strap snugly around the throatlatch.  When the horse tries to arch its neck to crib or wind suck, pressure from the strap causes pain.  To enhance this effect, some cribbing straps have points on the inside or a metal “gullet-piece” which has a recess for the trachea but may put more pressure on the throatlatch when the horse tries to arch its neck.  Some of these straps have a heart-shaped piece of thick leather that sits between the angles of the jaws with the pointed end protruding into the space between the jaws.  Cribbing or wind sucking straps generally decrease or prevent these vices at least initially.

However some horses will resume or continue the vices in spite of the strap and may eventually develop pressure sores from the strap which require their removal.  Although cribbing straps must be snug to be effective, they shouldn’t be so tight that they interfere with breathing, and they may need to be removed or loosened during feeding, although generally they don’t need to be. 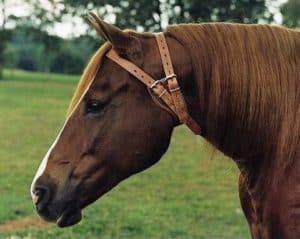 Another preventive device is a hollow, cylindrical perforated bit, which prevents the horse from making its mouth airtight.  A thick rubber or wooden bit that prevents the jaws from closing is sometimes successful but causes acute discomfort and is not recommended.  A different approach is to keep the horse in a bare-walled stall without a feed trough, waterer, or anything on which to place its incisors.  It’s reported that cribbing will stop when this is done.  It is likely to recur, however, if the horse is returned to the environment in which the vice developed.

Various surgical procedures have also been used to try to prevent cribbing and wind sucking although none are recommended.  The procedures are either ineffective, disfiguring, or associated with secondary complications.

It is always recommended to try and alleviate the cause before implementing the methods mentioned above to stop cribbing or wind sucking.

Here are some simple procedures which may help to reduce the incidence of cribbing or wind Sucking in horses: