Can horses have twins?

Previous Next
Can horses have twins?

Can horses have Twins?

Answer: Horses can have twins, but it is rare and typically one or both are lost during pregnancy.

Conceiving twins are extremely rare in horses, about a 1 in 10,000 chance, and twins that survive birth are rarer still. Horses can give birth to twin foals, but unfortunately, it is common for one or both twins to die during gestation or shortly after birth. It is common practice to avoid allowing twin pregnancies to progress to full term in horses.

Why are twin pregnancies bad for horses?

Horses are not designed to nourish two foetuses and produce viable twin foals and it is very unusual for twin foals to survive. Live twins are common among some livestock, like sheep and goats, less so with cattle, but rarest of all in horses, due to lack of space for the placenta and the higher risk of birth-canal complications in bigger animals. Double pregnancies are not only a high risk to the foals, but also put the mare at risk, and good outcomes are rare. A doubly strained twin labour often takes a large toll on the mare, increases the difficulty of labour, and dramatically increases the chances of death during labour.

How to avoid twin pregnancies in horses?

Bearing twin foals is considered so risky that most responsible breeders will have their mare checked by their veterinarian for twin pregnancies early on. A rectal ultrasound scan is the most common method of checking and is generally considered a routine part of the breeding process. If two embryos are detected, they will “pinch one-off” essentially terminating it. By “pinching” one embryo the health of the other is given the best chance in allowing it to thrive and increase its chances of being successfully born. 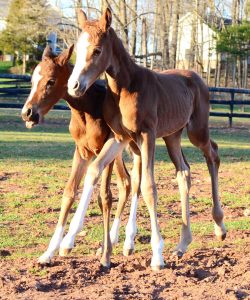